Scroll to top
Skip to content
Back
News
5 min read 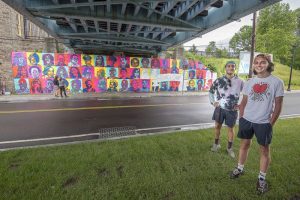 Nate Reilly had spent years riding past the dove with the peace branch on the College Avenue overpass. He looked at the expanse of the underpass wall and had a vision.

Why not make a mural?

“I filled out a Niagara Falls website community complaint form and they contacted me and said, ‘The mayor wants to meet with you.’ “

Sure enough, he met with Mayor Robert Restaino who asked for a mockup of what he had in mind. When he returned and presented the model, the mayor loved it but the location needed too much prep work so a different place was chosen — the underpass on Whirlpool Street by the bridge. Nate and his brother Josh, 22, have been hard at work on the mural for the past few weeks. It features 32 different faces of real people from Niagara Falls.

Each face was sketched on the wall during “projection nights.”

Then the brothers, and a host of volunteers, filled in the sketched faces with spray paint. The background color determines the scheme for each smiling portrait.

Nate’s artistic muse is Niagara Falls High School teacher Rob Lynch. His former teacher as well as Tyshaun Tyson and a host of other volunteers helped with the project.

“I went through high school with Mr. Lynch. He was awesome,” Nate said. “I pretty much developed my own style from there.”

The location is inspirational for the brothers who grew up in the DeVeaux neighborhood.

“We grew up riding our bikes here,” Nate said. “It’s great not to have to go over the bridge any more.”

As he painted Monday, Nate wore a shirt featuring the late New York City Street artist Keith Haring. He has a torso tattoo in the same style.

Nate said he prefers to work on an 18-by-24 inch canvas as opposed to 60-by-11 feet. There are many familiar faces in the mural, including a baby as well as a young child. The boy is Nate’s favorite.

“The little boy came to visit. He jumped out of the car. He was so happy,” Nate said. “I was like ‘I know exactly who that is. He was 2 or 3 and he only came half up one of the squares.”

The mural is part of the Niagara Falls National Heritage area NF Murals project. Ally Spongr, project director for the NFNHA is very happy about the location.

“This piece will be located right near the US-Canada border, facing the entrance from the Whirlpool Rapid Bridge into the North End of Niagara Falls,” she said. “It will be one of the first views of America that people see when they cross over.”