Scroll to top
Skip to content
Back
News
3 min read 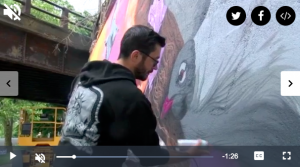 The mural will be among several others honoring people in history who have passed.

But Suarez wanted to do something a little different.

“I wanted to take the opportunity to try and put the spotlight on somebody who is young and alive, and contributing to the culture of our society,” he said.

Suarez said the mural is dedicated to a former apprentice, Kaori-Mei Stephens, who he mentored in the past. Stephens is half Black and half Japanese.

“I learned quite a bit from her, particularly about the importance of young people of color being able to see themselves represented in public art,” he said.

And a common theme in Suarez’s work is a focus on the wildlife indigenous to the area where he is painting.

“I think this is a beautiful location to be able to paint. Like the tree directly up above the wall, I get a lot of sunlight here,” he said.

Suarez has been working on this mural for five days now, and he expects it to complete in a couple of days.